Student Representatives on the board serve over 200,000 students but don’t have a vote on policy. 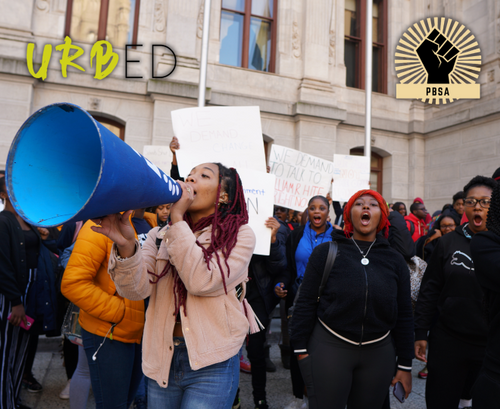 This campaign is in partnership with Philly Black Student Alliance (PBSA).

Philadelphia students deserve a seat at the table when decisions are being made about schools. Both the previous School Reform Commission and the current appointed school board exclude students and deny them access in the decisions impacting them and their communities. UrbEd has released demands to ensure Philadelphia schools are more democratic through greater student input. Notably, in our plan, we seek to grant student representatives with voting membership on the Board of Education, restructure the role, and increase student representation. We believe that these measures will ensure that students have an inviolable right to make decisions that directly affect their own education. There is a need for a new form of student power that allows students to have a say in Philadelphia’s education. We propose a system that supports student representation the following demands:

Allow for the 2 student representatives to have an actual vote in the board decisions. This requires changes to PA 1949 act 14 and Philadelphia city charter to allow people under 18.

These demands are a concrete step in giving students power in the system that impacts them on a daily basis. We hope the Board of Education and city & state elected officials enact these and make good on their claims to value student voice in decision-making processes. We will work until these are met. We invite feedback as well as support and encourage everyone to join these and invite everyone to support these demands. #STUDENTPOWER!